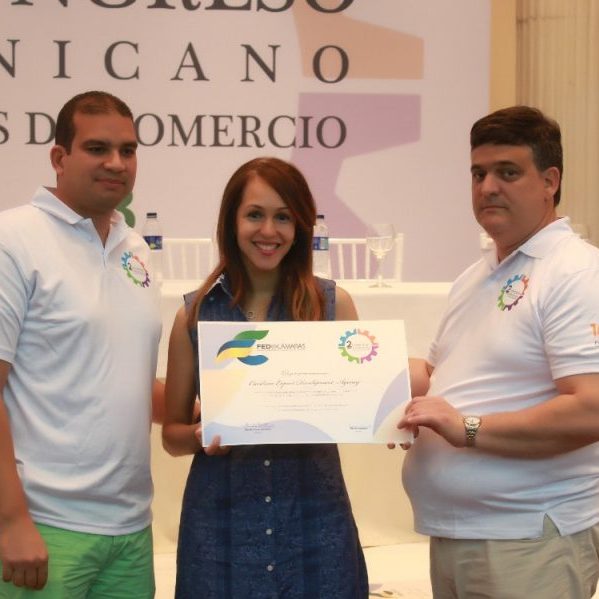 The Caribbean Export Development Agency received a special recognition from the Federation of Chambers of Commerce of the Dominican Republic for its work Â supporting the international competitiveness of CARIFORUM Small and Medium Sized Enterprises (SMEs).

This special recognition was received on August 12th by Mrs. Ileana Tejada, Investment Promotion Expert of the Agency based in Santo Domingo, from Mr. Claudio Fernandez President of FEDOCAMARAS and of the Chamber of Commerce of La Vega during the annual conference of the Federation held in Puerto Plata.

During the special ceremony for the recognition, Mr. Claudio Fernandez stressed the crucial role that Caribbean Export has played in promoting enhanced relations between the Private Sector of the Dominican Republic and their Caribbean Counterparts with special emphasis on Haiti under the 10th EDF Haiti-Dominican Republic Bi-National Programme funded by the European Union.

More than 100 private sector representatives from the31 chambers of commerce of the Dominican Republic covering the totality of its territory participated in this event which counted with the participation of Mr. Ignacio Mendez, Vice-Ministry of Industry and Trade DR.

Mrs. Tejada thanked FEDOCAMARAS, the European Union and DIGECOOM for their support in implementing its actions and expressed Caribbean Exportâ€™s commitment to continue supporting the commercial relationship between the Dominican Republic and the Caribbean through the implementation of the Binational Programme funded by the European Union.Â Â  Since the start on the Bi-National Programme in 2013 1,374 persons from the two countries private sector have benefited from the programme and over â‚¬1million has been awarded in grants.