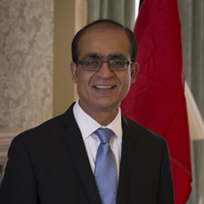 The Caribbean Export Development Agency (Caribbean Export) is pleased to announce that Mr. Deodat Maharaj has been appointed as its Executive Director effective February 1, 2021.

Mr. Maharaj, a national of Trinidad and Tobago has extensive experience in international trade, working with the private sector, governments, and multi-lateral institutions in a career spanning more than 25 years. He knows the Region well, having lived and worked in Barbados, Guyana, Suriname and Trinidad and Tobago; served with the Caribbean Development Bank; and has consistently championed the development agenda of the Region in his various roles.

He previously served as Deputy Secretary General of the 54-nation Commonwealth where he led its work in economic and social development. He spearheaded the trade and investment agenda for the Commonwealth across its developing country membership in the Caribbean, Pacific, Africa, and Asia. Mr. Maharaj understands the vital role of the private sector as a key driver and partner in development and in Sustainable Development Goals (SDGs) achievement in partnership with government. He also recognises the importance of creating an enabling environment for business to succeed and the imperative of attracting foreign direct investment in regions such as ours.

Mr. Maharaj supported the establishment of the Commonwealth Enterprise and Investment Council and sat on its Advisory Board for three years. Mr. Maharaj also served with the United Nations in senior roles in the field and at headquarters. He has also lived and worked in the United Kingdom, United States of America, Tanzania and Mozambique.

Commenting on his appointment, Mr. Maharaj shared: â€œIt is an honour and privilege to lead Caribbean Export and to serve our Region. I look forward to working with all stakeholders to help advance a truly transformational agenda for Caribbean resilienceâ€.

Mr. Maharaj can be reached at: dmaharaj@carib-export.com