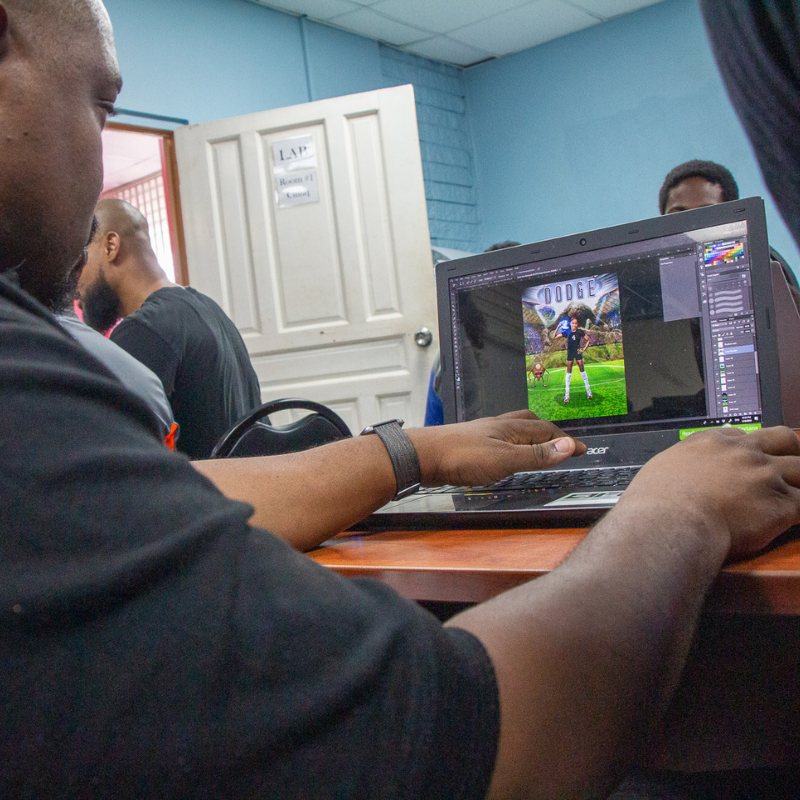 More than twenty-five (25) emerging and established Caribbean animators and gaming practitioners have been selected for an accelerator training programme scheduled from 12th â€“ 15th August 2019 in Trinidad. Teams from Jamaica, Barbados, Tobago, Guyana, St. Lucia, Grenada and Trinidad have been selected for this intensive training opportunity that will enhance their technical capacity in the area of 360 design development, allowing them to design an animated series and a game based on a single concept. In collaboration with the Caribbean Development Bank, Caribbean Export Development Agency, the University of Trinidad and Tobago, CARICOM, CARIFESTA, FilmTT and the Global Services Promotion Programme, the training is presented by Animae Caribe as a critical element of their continued work towards developing the animation industry and network throughout the Caribbean.

Dr. Marielle Barrow Maignan, Coordinator of CDBâ€™s Cultural and Creative Industries Innovative Fund (CIIF), shared â€œ The timing of this training was critical for us as the Accelerator comes just ahead of CARIFESTA XIV which is also being held in Trinidad and Tobago. CARIFESTA is the nexus of Caribbean cultural creativity and we wanted animation and gaming to be involved as we move to support new cultural industries. In addition to providing flights and accommodation for regional participants, we have pledged a prize of USD10,000 from CIIF to enable the winners to produce an Animation Production Bible, Game Production Bible and a 30-60 second trailer. CDB is committed to enhancing the technical and business skills of the Creative Industries (CI) in the Region and Accelerator programmes like this one allow us to equip a larger cadre of professionals with these skills while increasing access to resources.â€œ

The Animation and Gaming Accelerator training has been designed for emerging and established practitioners engaged in animation/game design to bring new projects and ideas into game and animation reality. Ten teams were selected from 49 applications from across the Caribbean. Each team is comprised of three persons inclusive of an animator/illustrator, an experienced writer and a game developer. Directed by international trainers Eric Elder and Tyree Dillihay from Monday August 12th -Thursday 15th, the camp takes place at the University of Trinidad and Tobago, John Donaldson Campus, in Port of Spain. The training will be closed sessions for pre-selected animation and gaming teams from the Caribbean and Trinidad & Tobago.

Caribbean Export Development Agency has supported this Accelerator, by facilitating the opportunity for youth to pitch to international buyers on the final day of the Accelerator. Participants will have the opportunity to pitch to their two trainers and representatives from the Caribbean Development Bank, alongside international animation sector buyers and mentors: Kimberly Wright – Sesame Workshop; Stephen Hodge -Toon Goggles LA; Audrey Kamga – Arte France; Animation Business Consultant – Joan Vogelesang and Dr. Ty Richardson – YoPro Global.

Founder and Creative Director for Animae Caribe Festival, Camille Selvon Abrahams says, â€œCaribbean animation is attracting tremendous attention. We are on the cusp of some great opportunities and we continue to ready a team of animation professionals. We are thankful that we have been able to work alongside funding agencies who understand the social and economic impact that jobs and careers in animation can make. I canâ€™t wait to see what happens next.â€

Introducing the Trainers
Trainer – Tyree Dillihay, joins us from SONY PICTURES ANIMATION, makers of Spider-Man: Into The SpiderVerse. Previously he spent 8 years as a director on Foxâ€™s hit animated sitcom, â€œBobâ€™s Burgersâ€ with 32 episodes and 2 consecutive Emmy Nominations to his credit. As an Animation Director, some of his past director credits include â€œDa Jammiesâ€ for Netflix, â€œAllen Gregoryâ€ for Fox, and â€œGood Vibesâ€ for MTV with various other projects ranging from pre-school to Not Safe For Work (also known as â€œget in here, shut the door, and come look at this!â€). Outside of animation, you can find Tyree on Instagram(@sneadsbyree) where heâ€™s built a niche social media following combining his love of cartoons, fashion, sneakers and sports working as a content producer for brands such as NIKE, CONVERSE, RED BULL, REEBOK, and FOOT LOCKER. Tyree graduated from California State University, Northridge with a BA in English and â€™til this day, no one cares.

His training sessions will focus on Writing for Animated Series, this short course designed for the Beginner, will see students participate in a 32 hour programme where lectures and directed independent study will cover topics such as Character development & design, basics of design and ideation, ideation to concepts.

Our Game Development trainer is Eric T. Elder, graduate of the University of the Arts in Philadelphia as an Animation Major with a BFA degree. Soon after, he began teaching animation production at the Art Institute of Philadelphia, his illustrious career with the Art Institutes spans over 15 years. When not working in education he has been a professional artist and producer at animation, gaming and media studios. He began his studio career at MTV Animation in New York on the Beavis and Butt-Head feature. He then moved to California where he worked as a key animator at Film Roman on King of the Hill and the Simpsons.

He then assumed his role as Academic Director of Game Art & Design at the Art Institute of California â€“ Los Angeles in Santa Monica. There he founded his special video game production team course, the Game Wizards. The Game Wizards under Elderâ€™s leadership produced over 20 titles mostly in Unreal and had team sizes ranging from 5 to over 100. His Game Art & Design program was the most successful in the entire Ai system with 300+ students and placement rates of 90%-100% at AAA game studios including: Electronic Arts, Activison/Blizzard (Luxoflux, Treyarch, Neversoft, Infinity Ward), THQ (Heavy Iron), Id Software, Sony Santa Monica, Microsoft and Rockstar San Diego.He also created and launched a new degree program in Game Programming. The Game Programming degree he developed has gotten near 100% placement in the game industry for graduates since its inception. In 2009 he achieved the title of Game Industry Development Representative (G.I.D.R.) and expanded his responsibilities for the 12 campuses in the Western Region and the over 45 across the Ai system.

In Trinidad, his Game Prototype Design Short Course will allow participants to Learn the fundamentals of design, mechanics, theme and gameplay. Teams will design and build a paper prototype version and then test and pitch the game to the group, followed by a formal pitch panel on Friday. This session is highly inter-active and our objective is that by the end of the week, there is a first version of a playable game that you can then take into digital development along with the skills to create future designs.