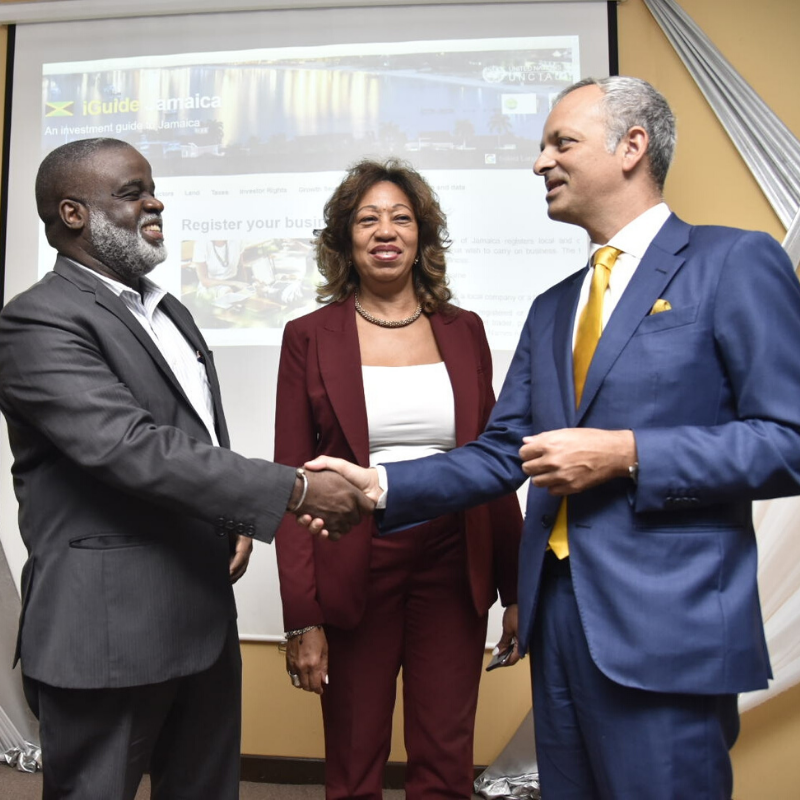 Jamaica has joined 28 other nations, including several Caribbean states, that have developed online investment guides (iGuides).

These facilities are repositories of information for local and foreign investors interested in doing business in the respective countries.

Work to develop the guides was led by local stakeholders, principally countriesâ€™ investment promotion agencies in several instances, in collaboration with the United Nations Conference on Trade and Development (UNCTAD), which is headquartered in Geneva, Switzerland.

The information, which is hosted on UNCTADâ€™s website, can also be accessed on JAMPROâ€™s platform from any location globally.

It facilitates a comparison of Jamaica as an investment destination, alongside other countries globally.

The iGuide is intended to provide investors with information at their fingertips that will help them in their decisions to invest in Jamaica.

Among the focus areas are manufacturing, agri-business, energy, the creative industries, the knowledge sectors, mining, tourism, and the Logistics Hub Initiative (LHI) and the partner Special Economic Zone (SEZ) framework.

A foreign translation feature has also been incorporated to facilitate ease of communication.

The agency will serve as the facilityâ€™s custodian and will be responsible for, among other things, keeping the siteâ€™s information up to date.

The presentation was made during a brief ceremony at JAMPROâ€™s head office in New Kingston.

Ms. Edwards, who is CAIPAâ€™s Immediate Past President, said the iGuide is an important tool and welcome addition to investment promotion in Jamaica.

Noting that the local investment climate is â€œextremely positiveâ€, she said the iGuide â€œis going to take that information out to the world in a form that is really using best practiceâ€.

Ms. Edwards assured that as the countryâ€™s national investment and promotion agency, JAMPRO remains committed to improving the business environment.

Ms. Edwards noted that JAMPRO serves as the Secretariat for the National Competitiveness Council, which manages Jamaicaâ€™s business environment reform agenda, intended to ensure that businesses feel the difference that this undertaking is going to make for them.

â€œAlready we see that they are feeling it, because Jamaica recently jumped four places in the [World Bankâ€™s] Doing Business Report, to number 71 out of 140 countries,â€ she added.

Ms. Edwards encouraged stakeholder interests to utilise the guide and disseminate it â€œas much as possibleâ€.

â€œWe think it has really good information. We want you to tell everyone about itâ€¦ that it is a tool, not only for foreign businesses, but for local businesses to use to develop their business cases and present their projects,â€ she said.

For his part, Mr. Richards said UNCTADâ€™s aim and role in advancing the iGuide â€œis really to support the Government in implementing Vision 2030 Jamaica as part of the UNâ€™s overall development assistance frameworkâ€.

This, he noted, is being done in tandem with the other UN and international organisations in Jamaica.

â€œWe know that it has been a difficult time for the region, according to the UNCTAD data, in terms of attracting foreign direct investments. But for Jamaica, I think these are very exciting times,â€ he said.

â€œWe are very excited by that because, given all that Jamaica already has â€“ a good business infrastructure, a supportive government, a good education system, good market access â€“ this will provide spillovers, linkages and opportunities for many different sectors in Jamaicaâ€¦ particularly new sectorsâ€¦ and will also lead to more jobs, more wealth, and more development for the country. So, thatâ€™s very important for us,â€ he added.

The UNCTAD Executive said the organisation is â€œvery happyâ€ to be working with JAMPRO and other stakeholders, to attract and facilitate investment for the â€œnew, exciting and promising sectors in Jamaicaâ€.

Other Caribbean states that he said have developed investment guides are Antigua and Barbuda, St. Vincent and the Grenadines, and St. Lucia.

The extent of the platformâ€™s development also incorporates countries in Asia and Africa, among other locations.

This article was originally published on the Jamaica Information Service website