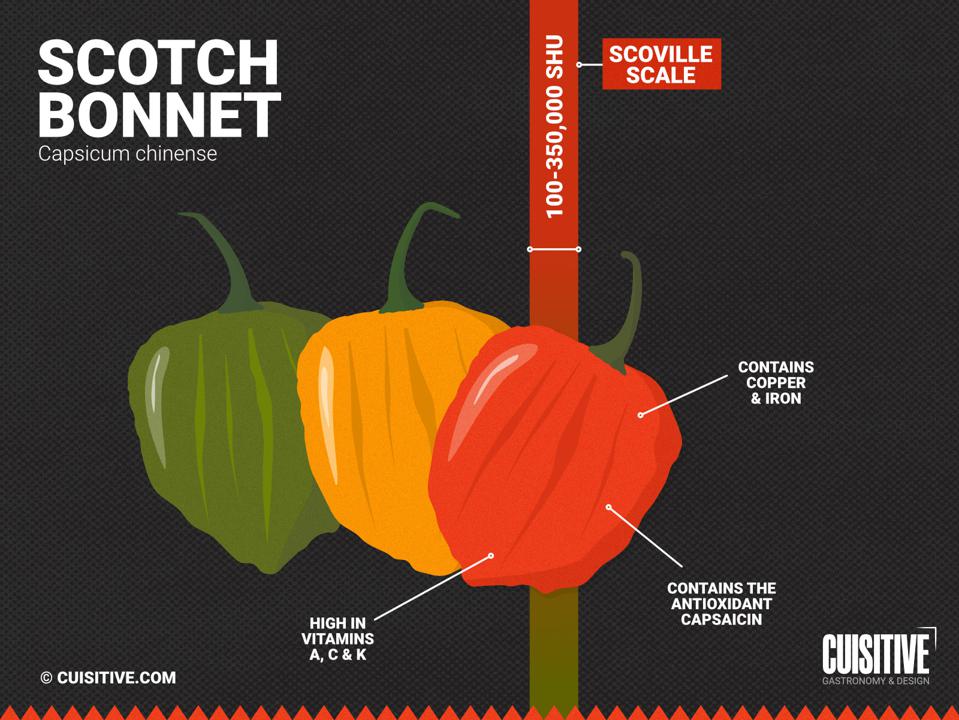 A sure fire way to distinguish between â€˜localsâ€™ and â€˜foreignersâ€™ at a Caribbean dinner table is to listen out for the request for â€˜pepper sauce,â€™ a hot and tangy flavouring that is typically made of the indigenous Scotch Bonnet, otherwise known as Scotty Bon, Scotchy, Bonney Pepper or scientifically, Capsicum Chinense.

The Scotch Bonnet is the main commercial variety of pepper in the region, having achieved this status through a process of repeated selection based on aroma, pungency, flavour, yield, and disease and pest tolerance.

â€œScotch Bonnet Peppers are the â€œback roadsâ€ that lead to the same destination,â€ says Chef Peter Ivey of The Reggae Chefs, of the tear-inducing Caribbean flavour. â€œThey are the roads that your parents told you not to walk down alone at night until you were all grown up.â€

â€œThe Scotch Bonnet pepper can be dangerously deceptive, as its distinct aroma can lull you into lowering your guard,â€ Ivey continues. â€œIts prowess in deception lies in its ability to either tinge your tongue with sweetness or take traditional Caribbean flavours to heights matched only by the peaks in cock pit country, Jamaica where they are abundantly grown.â€

Traditional curry goat and thick Caribbean soups are elevated with the â€˜Scotchieâ€™sâ€™ presence, and rice and peas is just â€œrice and some peasâ€ without the tail of a scotch bonnet pepper peeking out from under a few rice grains. Escoveitch fish would be relegated to simply fried fish without the Scotch Bonnetâ€™s tangy flavour and no self-respecting Caribbean person wants a jerk sauce made without a bright yellow, orange or red Scotch Bonnet â€˜flagâ€™, indicating that appropriate caution must be taken.

It is no wonder that Scotch Bonnet has become one of the biggest trends in international food, claiming the â€˜hotâ€™ spot of the first trend listed by The Happy Foodie in its â€œ10 food trends to look out for in 2020â€, a mention on the list of Uren Food Ingredientsâ€™ â€œ2021 Global Food Trendsâ€ and a hyper-regional food trend on New Zealandâ€™s Par Avion â€œTop 25 Food Trends for 2020â€.

Jamaica is the biggest player in the regional market, with top agro-processors including Grace, Walkerswood, Spur Tree Spices and Jamaicaâ€™s leading pepper sauce producer, Grayâ€™s Pepper Products Limited, with approximately 60 per cent of its products destined for the export market.

Popular brands in the region include Grayâ€™s hot sauce out of Jamaica, Baronâ€™s Blazing hot sauce which is manufactured in St. Lucia and Grenada, Matoukâ€™s hot pepper sauce of Trinidad & Tobago, Windmill Products Hot Pepper Sauce from Barbados and FIYAH sauces by Tomfoodery Kitchen & Bar in the Cayman Islands.

Scotch Bonnet is in such high demand by both the Caribbean domestic and export markets that, at a 2018 meeting of the Jamaica Agro processors Association (JAPA), members complained of a lack of the famous pepper as a raw material for sauces. The supply at the time could only meet about 55 per cent of the demand for sauce production.

Jamaican export sales of the incendiary condiment are reflective of the growing demand. Exports of hot pepper sauce totalled $4,453,019 in 2019. Between 2013 and 2017, the export of fresh hot peppers increased by 713 per cent and 302 per cent for semi-value added. (JAMPRO)

Of all the value added products created from the pungent pepper, none are more popular than traditional Caribbean sauces and condiments, including the famous hot sauce or as it is known in the region, pepper sauce.

According to regional trade and investment promotion agency, Caribbean Export, the market for Caribbean sauces and condiments is worth $1.49 billion, having grown in value by 16.8 percent between 2019 and 2020.

Jamaica Promotions Corporation (JAMPRO), a promotional agency for export and investment in Jamaicaâ€™s local and international private sector, is currently in dialogue with investors who are interested in growing the hot peppers on a large-scale on-island. It is also working with other government agencies through a Pepper Value Chain Task Force (managed by the Bureau of Standards Jamaica) to identify goods made from the Scotch Bonnet pepper and a strategy to facilitate the production of these goods.

â€œWith more investments into the sector, Jamaica will be able to meet the large demand that exists for the peppers in their natural state, as well as pepper mash which can be used to make sauces, seasonings and other products,â€ says Diane Edwards, President of JAMPRO.

â€œThe next step for Jamaica is to create more value-added products from Scotch Bonnet peppers. This will not only have a positive impact on the economy by increasing export sales and creating jobs, but it will also diversify our exports in the agribusiness sector.â€

This article which was originally published by Forbes was submitted by Daphne Ewing-Chow, Forbes Senior Contributor, Food & Drink.