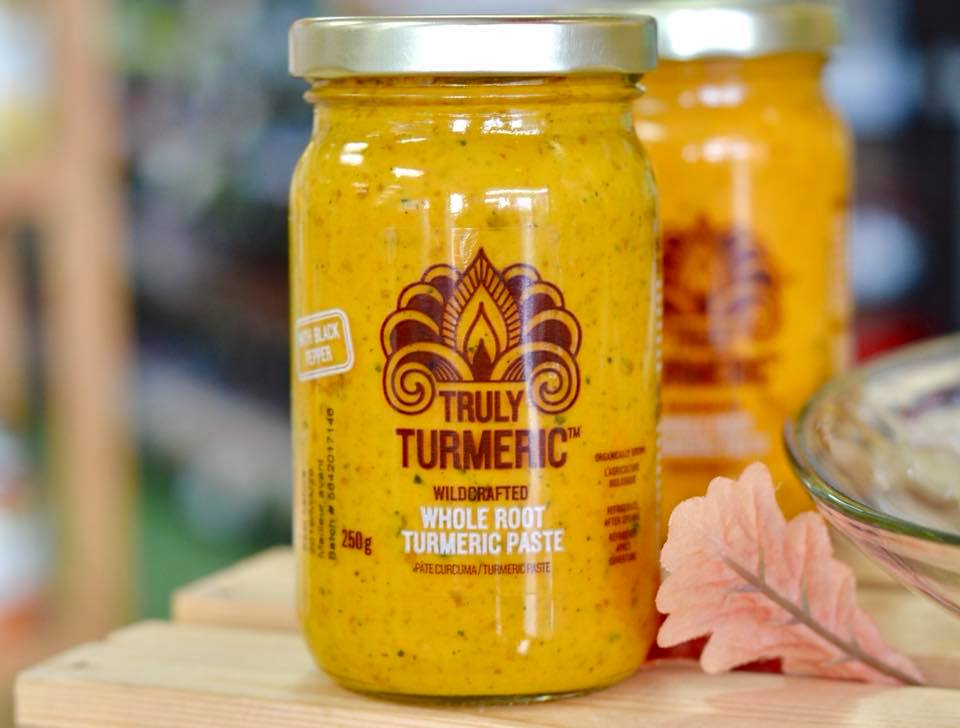 When Umeeda Switlo visited Belize in 2014 on assignment for an international NGO, she immediately fell in love with the Central American Country, its people, and a golden, pungent root spice.

It was the most beautiful turmeric that I had ever seen in my life, she recalled.  It was huge and really orangey in colour.

And when she shook the hand of one of the old Indian turmeric growers, she felt inspired, determined to help him, and other growers reconnect with their culture.

Turmeric, the main component in curry, was introduced to Belize over 200 years ago when indentured servants arrived in the country from India.

Revered for its medicinal qualities, turmeric is also deeply rooted in Umeeda’s culture. Born in Uganda to a renaissance woman, Umeeda recalls that her mother, Lella (aka Mamajee), raced cars, ran her own Montessori and cooked a mean curry. They fled the war-torn country in the 1970s, arriving in Canada with nothing more than a suitcase and memories.

Mamajee bonded with her daughter Umeeda, and eventually, her grand-daughter Nareena, in the kitchen, sharing stories from home, and teaching them traditional recipes. She also used these epicurean sessions to instill a strong sense of social responsibility, often causing Umeeda and Nareena to pause for thought whenever she asked what they would do to make the world a better place.

They found the answer during Udeema’s 2014 visit to Belize, where a perfect marriage of history, tradition and mother-nature birthed an award-winning social enterprise that would support farmers to earn extra income, employ youth, improve health and produce products sustainably.

Their entrepreneurial venture, Naledo Belize, combines Nareena’s name with Toledo, the district in Belize where the turmeric is sourced. The company purchases turmeric directly from local farmers and uses it to manufacture Truly Turmeric the world’s first wild crafted, whole root turmeric paste.

It’s just turmeric, you may say. But make no mistake, Naledo’s mission, their end product and the social element used to produce it are transformative. The company has been shortlisted for a SIAL Paris 2018 Product Innovation award, which recognises those who help shape what we eat today, and tomorrow.

The awards will be held in Paris during the world’s largest food innovation exhibition, from October 21-25, 2018.

Getting Business Up and Running

So, what does it take to create an innovative, socially conscious, sustainable, award-winning start-up?

There were a few things I had to overcome, the first being the fear of myself, Umeeda shared. I was also creating a new product. No one in the world had ever done this before, so there was no example for me to follow. And I was doing it in a foreign country.

Umeeda also recalled past entrepreneurial ventures. Being your own boss is challenging, she said. And she wasn’t quite sure she was willing to do it again. But she was encouraged by the young, aspiring entrepreneurs in Belize, as well as her daughter’s interest in, and passion for social enterprise.

The idea of a mother / daughter team really won me over,Umeeda said. She has skills that I don’t have, and I have skills that she doesn’t. So, it felt like a good team.

Umeeda has a very diverse entrepreneurial background that ranges from owning and operating a huge child care centre, to a managing musicians and building a Rock n Roll venue.

Mum and daughter are also both experienced in international development. Nareena possesses a wealth of knowledge in the non-profit sector, where she worked as a fundraising director; but Naledo is her first entrepreneurial venture, and she admits, that starting a business has been a huge learning curve.

I remember going into meetings with distributors, and writing down all the acronyms.  They were like what’s your SRP?  And I’d go to the bathroom with my phone to Google what is SRP, she said.  I was constantly trying to balance wanting to be honest and saying, I’m not sure what that means, versus sounding too naive and losing negotiation ability.

Challenges also abounded on the personal front. As Nareena shares, her relationship did not survive the rigors of entrepreneurship.

I had a partner, a boyfriend that I lived with, and he did not like what I was doing. He thought that I was stupid for doing this, she shared. I remember when I got my first business cards printed; he said you can’t call yourself a COO. You are the COO of nothing right now. We are not together anymore.

But despite the numerous obstacles they faced, Nareena and Umeeda kept their eyes on the prize. They remained focused on their mission and dedicated to delivering on Mamajee’s wish that they live with purpose, contributing positively to the lives of others.

Naledo started product development in 2015. To gain exposure, they decided to forego the farmer’s market route, opting instead to launch at a May 2016 industry trade show in Vancouver, Canada, where retail buyers, distributors and brokers would all be present. Their setup was basic, just 50 labeled jars and a few samples. But the response was overwhelming. Naledo caught the eye of a national distributor who believed in their social enterprise model and helped them grow from zero stores in 2016 to 600 stores across Canada, coast to coast. The company also now exports to the Bahamas, has already struck a deal for the US, and is gearing up for export to Europe.

There’s no denying that they produce a stellar product, but Naledo’s success is also due largely in part to the way they do business. Youth entrepreneurship, regenerative agriculture and sustainability are foundational to the company.

The human side of our success is what I am most proud of, the impact that producing this product has had on the growers we partner with, people being able to save for their kids’ education, renovating homes, going on trips, Nareena said. We’re seeing more people, especially young people, who are proud to say I grow turmeric, instead of viewing agriculture as something that poor people do.

Naledo Belize can add their nomination for a SIAL Paris award to a growing list of global recognition that includes an innovation award from the Government of Belize, one of Canada’s top 10 food companies to watch for in 2018, and a spot on season 13 of the hit TV show Dragon’s Den.

At SIAL, tens of thousands of food and beverage industry stakeholders will have an opportunity to sample Naledo’s Simply Turmeric paste, which will be on display at the Caribbean Export Development Agency (Caribbean Export) booth. The Regional trade and investment promotion agency supports CARIFORUM businesses with development for export and will be showcasing 12 Regional companies at the exhibition. Caribbean Cure, a Trinidad-based tea company that will be part of the Caribbean Export exhibit, is also a SIAL nominee.

That two Regional start-ups have made it onto the SIAL shortlist is a tremendous accomplishment, and in Umeeda’s opinion it’s to Caribbean Export’s credit.

To have an organisation that believes the Caribbean Region has something to offer the world, that is very important. What they provide in terms of access to knowledge and finance just blew me away, Umeeda said. I cannot stress enough how supportive that is.

Naledo Belize hopes to launch in Europe in 2019. Umeeda and Nareena both stressed that this is possible because of Caribbean Export.

A Word of Advice to Aspiring Entrepreneurs

Naledo’s journey from Belize, to Canada, the Caribbean, America and soon Europe, has been hard fought, and filled with sleepless nights. But that’s simply what entrepreneurship is all about, Umeeda shared. She and Nareena reflected on the countless nights they have been awake at 3:00 AM, worrying, troubleshooting and contemplating next moves, the numerous times the voice of doubt nudged them to call it quits. But whenever those doubts surfaced, the pair found their will to keep going in a figure, 350, the number of growers in Belize they have partnered with.

I think about not failing them, about the amazing youth team we work with in our processing factory, about making my grandmother proud, and about all of the other people in my life who have given me courage and shown me that you must be resilient through adversity, Nareena said. So maybe I sleep in a little extra on those mornings when I didn’t climb into bed until after 3:00 AM, and I’ll just keep plugging away.

Nareena also implored fellow entrepreneurs, and those on a path to entrepreneurship, to surround themselves with like minds. Marketing and social media focus on perfection, but beneath it all is immense work, dedication and self-sacrifice. Sharing these struggles with peers who understand is vital.

It makes you feel validated, she said. You realise it’s not just me. I’m okay.

And turn a deaf ear to the naysayers she advised.

If their critique is about your product or your service, maybe take a listen, because in that negativity, there might be some chance for improvement.  But if they are negative about your passion, who you are, and what you believe in, tell them to take hike!