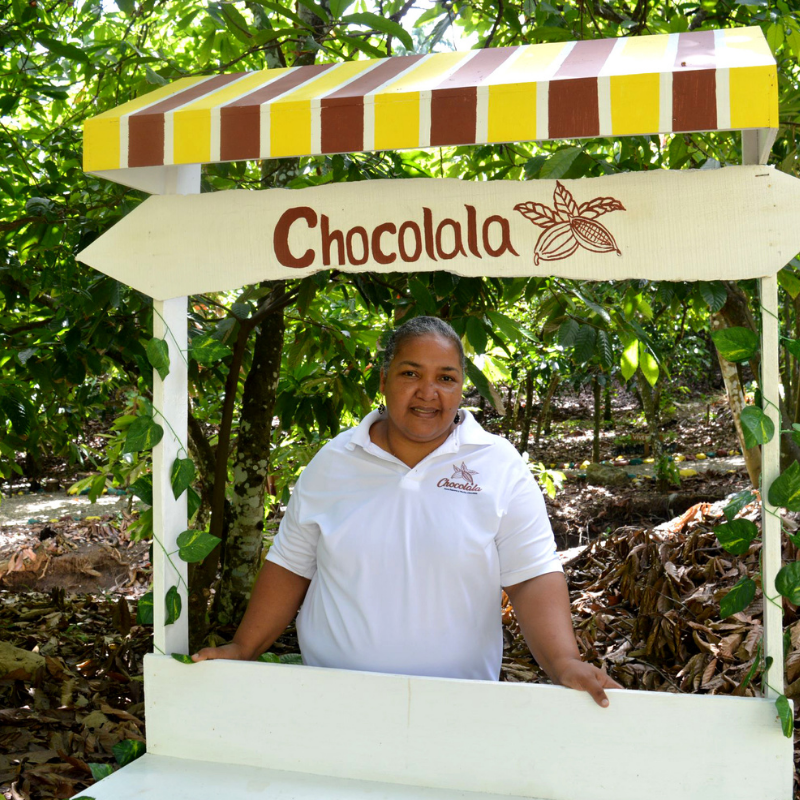 In the community of Las Lajas, in the municipality of Altamira, Puerto Plata, five women, at the time belonging to the now defunct Ana Idalia Navarro Mothers’ Club, agreed to seek ways of generating income without having to be employed. Silvia García, Benita Canela, Milagros Marte, France Altagracia Capellán and Ana Cecilia García, decided in 1990 to sell handcrafted chocolate.

They would go from house to house to offer their cocoa balls. The profits were about 500 pesos per month (equivalent to about 38 dollars at the time), on average 100 pesos for each, an income that helped sustain their homes, and, most importantly for the women, they were able to devote time to raising their children.

After their efforts they managed to form an association, which they called Ana Idalia (Lala) Navarro, in honor of the leader and member of the former Club, through which they could generate employment and contribute to the development of the community. Prior to the first year, it received aid of 500 thousand pesos (about 3,750 dollars at the time) from the Spanish organization for development cooperation, Intermon, an affiliated of the Oxfam confederation. With this contribution they bought the land where their facilities are currently operating, and machinery: a mill to grind cocoa, a crusher and a stainless steel table. The product formerly called Ana Idalia Chocolate became Chocolala.

This economic boost strengthened production capacities and expanded the range of distribution of the cocoa balls. In addition, two other products, derived from maize (corn), were incorporated: The classic gofio (a snack made from toasted corn and ground with sugar) and gofio with cinnamon, which would later reach the gondola displays of the supermarkets of the Centro Cuesta Nacional, CCN, one of the most important commercial chains in the country.

By 2013, the number of women in the company had increased from five to 12, and its natural product portfolio totaled seven, thanks to the consultancy of the Institute of Innovation in Biotechnology and Industry, IIBI, and the economic and technical support of the Japan International Cooperation Agency (JICA). In that year, Chocolala had access to a “soft” loan through a business support programme, which allowed it to expand its machinery inventory as well as its productive capacity.

“Before Chocolala, the only option we had was to work in family homes, doing domestic work in Santiago and Puerto Plata, away from our children. Now we work here, we take money home without being away,” says Nelfi García, the general manager.

One of the characteristics of Chocolala products is the care with which the raw material is chosen and the high levels of food safety. The cocoa variety used is the Hispaniola variety. It is less acidic than the Sanchez variety, and it produces a seed with a fruity flavor.

Chocolala is part of a group of five Dominican companies, selected by Caribbean Export in the Haiti-Dominican Republic binational cocoa/chocolate value chain project, funded by the European Union, EU, through the 11th European Development Fund.

Cooperation with the EU has enabled Chocolala to obtain a vertical powder packing machine, improving the efficiency of the packing process and measurements, and it has also enabled access to technical assistance for the process of obtaining export records, ultimately improving competitiveness.

With the vertical powder packing machine, the products have been able to reach the retail sector (grocery stores or rum shops), as it has a dosing screw conveyor, with programmable pre-cutting and a packing capacity of 40 bags per minute. In spite of that, the General Manager emphasizes training in administrative procedures and levels of efficiency in the production value chain. This donation has also enabled the company to respond to its growing demand, and thus to hire more permanent employees, which to date total 20 (16 women and 4 men).

In Chocolala, producing chocolate and other items derived from cocoa and maize is not only an opportunity for work, but an expression of inclusion and pay equity exercise. “Sometimes, when we have large orders, the spouses come and help us. They become a part of our work, in order to be able to complete it”, assures Nelfi, who notes that this attitude demonstrates the important role within the family of the work that women do.

They also created the Ecological Trail, a space to promote tourism, where visitors come into contact with the cocoa plantations and the natural attractions of the area. This undertaking has also created new sources of work.

Benefits that impact everyone

A fund has been created with part of the resources produced by the routes of the Ecological Trail, from which loans with very low interest rates are provided to the collaborators, if they have special needs.

On the other hand, a part of the company’s profits is earmarked for the Association to buy essential goods, so that the members may obtain them at wholesale price.

In addition to helping the members, the Association provides assistance to vulnerable communities. Many have had their houses repaired or have been given assistance to alleviate deficiencies typical of their condition.

The next frontier: The international market

The initiative of those five women who dreamed of a livelihood within their community 30 years ago is now a consolidated company that has drawn more than an exclamation of surprise from the unbelievers who only saw illusions during the years of hard work. These aspirations today are the building blocks in which an average of 24 quintals (2.4 tons) of cocoa are processed weekly for the production of products, the raw material being brought from community producers. Previously, they did not exceed more than two quintals per week.

The women of Chocolala have responded with creativity and with the right attitude to the lack of opportunities in a rural community in which traditionally the woman has only had two options: being a housewife or going to work in Santiago or Puerto Plata. Now, with the support and technical consultancy of Caribbean Export and allies such as the European Union, Chocolala has a firm eye on the export trade.