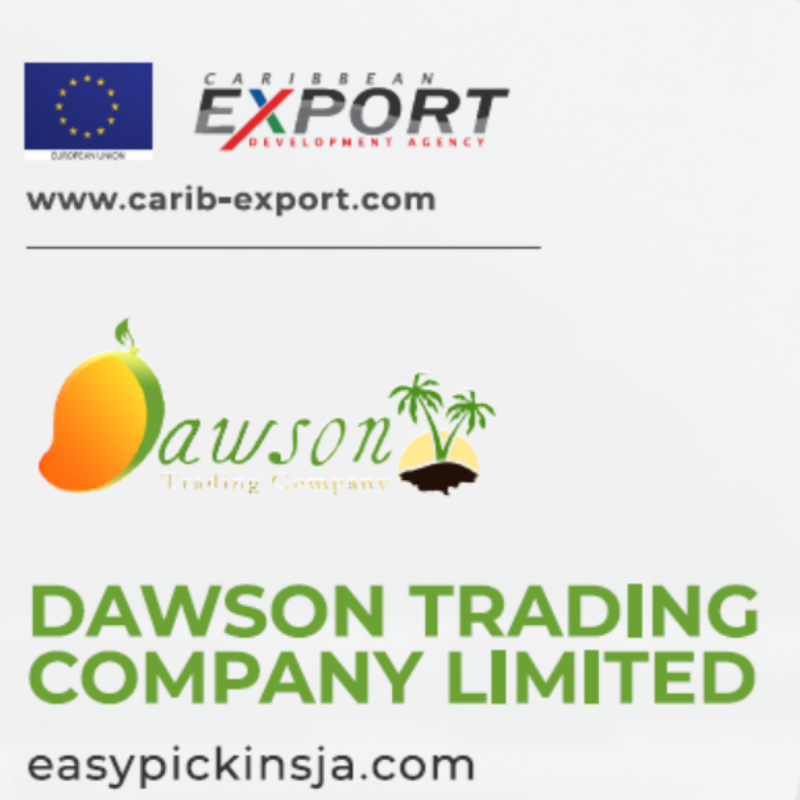 Dawson Trading Company Limited (Dawson Trading) was established in 2013 by owner, Jordan Dawson. The company specializes in the growth, procurement, and exportation of traditional Jamaican fresh produce including mangoes, breadfruit, avocado, peppers, and yams, to overseas markets primarily Canada, USA, and the UK.

Dawson Tradingâ€™s received a financial grant via the Direct Grant Assistance Scheme (DAGS) in 2018 funded by the European Union under the 11th EDF Regional Private Sector Development Programme. With the grant Dawson Trading sought to develop a viable methodology to keep fresh fruit in its natural state for longer periods of time by processing/peeling, blast freezing and storing the product items in a frozen state. The project included the identification, acquisition, and installation of production equipment for the processing of fresh produce, the development of food safety – HACCP plan and recall program to meet HACCP certification. In addition, the project also included marketing and promotions including the creation of a website and suitable branding for the packaging and labelling of the products.

The production equipment acquired, through the DAGS, has enabled Dawson Trading to create a new line of six different shelf stable flash frozen fruit products. This has allowed the company to increase the quantity of produce purchased from local farmers. Notably, these purchases now include bruised and below standard fruit, which would previously have been discarded. This action has, therefore, reduced wastage and increased revenue generated for Jamaican farmers.

The acquisition of machinery for processing fresh produce was central in producing a new product line of frozen fruits, for the export market. Frozen products are now exported to North America, Europe, and the Caribbean. It has also increased the volume of purchases, reduced spoilage, and increased revenues for suppliers, by purchasing below standard produce (with no effect on the final quality of the product) and higher volumes during peak bearing season.

In addition, the company developed a website and a logo. Training was carried out for the implementation of food safety standards for key staff members and major work was done on documentation and improvement of the facility towards HACCP certification.

Over the medium-term, the DAGS project enabled Dawson Trading to increase staff by 6 employees, namely an administrative assistant, a driver, and 4 labourers. In 2020 the companyâ€™s exports increased by 17% and revenue/sales increased by 20%. Of this percentage 2% was from the flash frozen line. The project also significantly increased revenue for local farmers because they can now sell more volumes including bruised products.

â€œThe Direct Assistance Grant Program (DAGS) through the Caribbean Export Development Agency, has been instrumental in helping to equip my company with the provisions needed to propel it into its next stage of growth. Primary drivers for this growth were the implementation of food safety systems and the tooling of our factory to further develop our line of Jamaican flash frozen produce. Without the DAGS project, the companyâ€™s survival would have been unlikely during the pandemic.â€ Jordan Dawson, Owner.