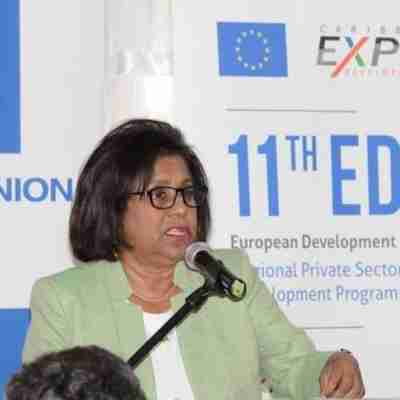 Supporting CARIFORUM firms to leverage the CARIFORUM-EU Economic Partnership Agreement (EPA) is at the forefront of the Caribbean Export Development Agencyâ€™s work programme as they implement the 11th EDF Regional Private Sector Development Programme (RPSDP) funded by the European Union.Â  Over 70 business and Business Support Organisations participated in the specially held workshop at the Trinidad and Tobago Manufacturersâ€™ Associationâ€™s (TTMA) Trade and Investment Convention (TIC) on Friday 7th July and a further 90 persons were able to participate via the live streaming.

Co-hosts for the workshop, the European Union (EU) Delegation, expressed their commitment to supporting the regionâ€™s private sector highlighting that â€œone of the EPA’s main objectives is to promote economic growth of the region and to gradually integrate the Caribbean states into the world economy. It aims to increase chances for the Caribbean businesses to participate in global value chains and supports the conditions for increasing investment and private sector initiatives, enhancing supply capacity and competitiveness in the CARIFORUM Statesâ€ said Ambassador Biesebroek of the EU Delegation in Trinidad & Tobago in his remarks at the opening of the workshop.

The EPA was signed in 2008, and the opportunity for CARIFORUM firms to grow their businesses through exporting is apparent.

â€œCaribbean Export has focused its attention on providing export development services (such as training, grant financing, trade and business intelligence) to SMEs and Business Support Organisations in order to build their capacity and enhance their trade competitiveness globallyâ€ informed Robertha Reid, Senior Advisor at Caribbean Export. One of the Presenters, Dr. Noel Watson is currently working with the Agency to break down the EPA so that private sector can be more aware of the market opportunities available to them. Also sharing at the workshop was Mr. Adam Wisniewski from the EU Delegationâ€™s office based in Barbados who expounded on the core elements of the EPA.

The Agency, the EU Delegation and the CARIFORUM Directorate supported eight Business Support Organisations from across the region to exhibit at TIC to showcase the products of their respective members and countries in an effort to gain interest and increase regional trade. Events of the similar nature, bringing the Caribbean private sector together and explaining practical aspects of the EPA are to be organized regularly throughout the region.

Minister of Trade and Industry, Senator the Honourable Paula Gopee-Scoon made a plea for â€œa more aggressive approachâ€ to be taken by the private sector as it relates to exporting products and services.Â  With regional and international buyers attending TIC, there was a real opportunity to increase the market penetration of Caribbean products into export markets including Europe using the EPA.