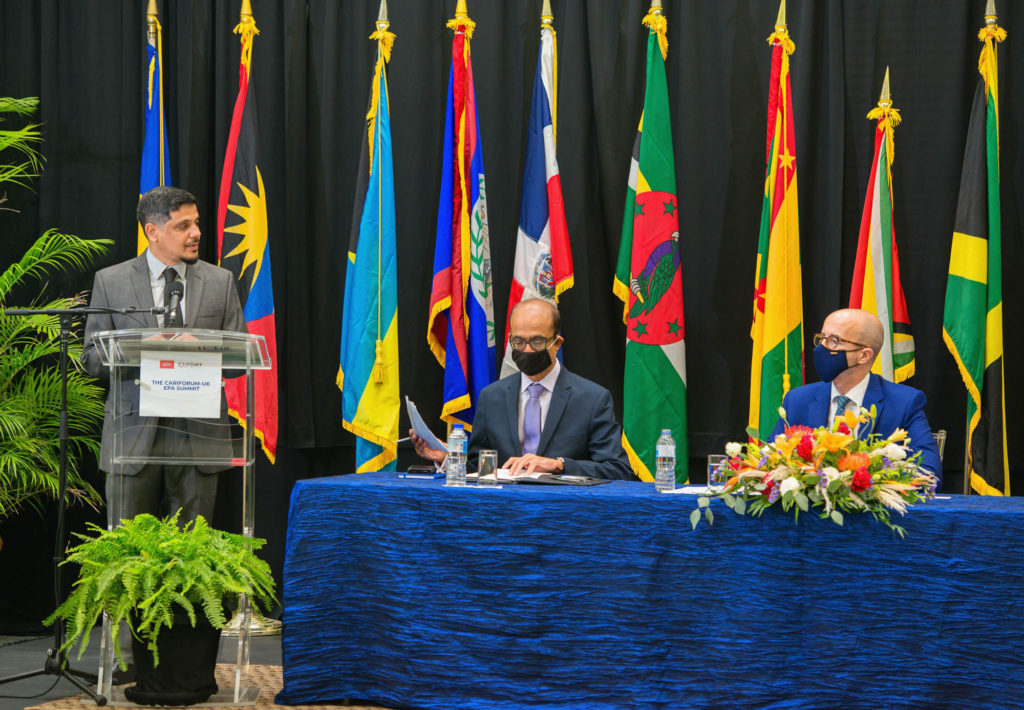 The new economic partnership agreement (EPA) between the CARIFORUM Caribbean and UK was welcomed as the basis for a revitalised modern partnershipâ€, and â€œan enablerâ€ and â€œplatformâ€ for expanding trade and investment for all parties at a summit on Wednesday 24 November, 2021 , attracting more than 500 participants.

The hybrid event saw high-level Government representatives, trade promotion experts and businesses discuss opportunities under the partnership for economic growth both sides of the Atlantic. Services exports, renewable energy and private investment for green transition were some of the topics explored by participants. Speakers noted support at the firm level will give life and purpose to the Agreement, and full ratification would bring greater confidence to businesses.

Opening the event, Deodat Maharaj, Executive Director of Caribbean Export Development Agency said: â€œThe EPA has the potential to make a big difference to our economies, but we need to see concrete, practical results at the firm level.â€ Referencing the climate negotiations, COP26, Mr Maharaj emphasised the importance of the transition to a green economy, which he said would generate around 400,000 jobs in the region.

Noting the dual challenge of climate change and the pandemic, Jonathan Knott, Her Majestyâ€™s Trade Commissioner for Latin America and the Caribbean, stressed a â€œstep changeâ€ in the way both governments and businesses engage. He said the UK is fully committed to implementing the agreement, which will bring down trade barriers and â€œopen new doorsâ€ for both British and Caribbean businesses. Mr Knott urged companies to come forward with ideas and requests to make the agreement work for them.

Business had a strong voice at the event, raising questions about honing competitive advantage and the different support measures to be provided under the EPA, particularly for small and medium-sized enterprises. Dan Hart, UK Regional Trade Adviser for the Caribbean said that more needed to be done to translate the agreement into practical policy actions. Awareness was relatively low, he noted, particularly among small businesses, and to address this, the UK Government offers online tools to make trade easier under the EPA, and improves trade and market intelligence for Caribbean SMEs through the UK Trade Partnerships programme.

â€œFor us, our role in the global system is facing a test, but the global system itself is facing a test,” said Marsha Caddle, Minister in the Barbados Ministry of Economic Affairs and Investment. She praised references in the agreement to climate investment and said that small island developing states (SIDs) must have more of a say in financial mechanisms to respond to the scale and urgency of challenges facing the climate vulnerable region, which is also disproportionately affected by the pandemic. â€œThe region must work together and with the UK to build a marketplace for growth and resilience funds,â€ she said.

Presenting an in-depth study of the EPA, Dr Keisha-Ann Thompson said the agreement presented a significant opportunity at a critical juncture for trade and investment in the region, particularly for services export. Dr Thompson said it can support the development of regional value chains and integration into global value chains, important as some CARIFORUM countries had become less integrated in the global economy between 2008 and 2020.