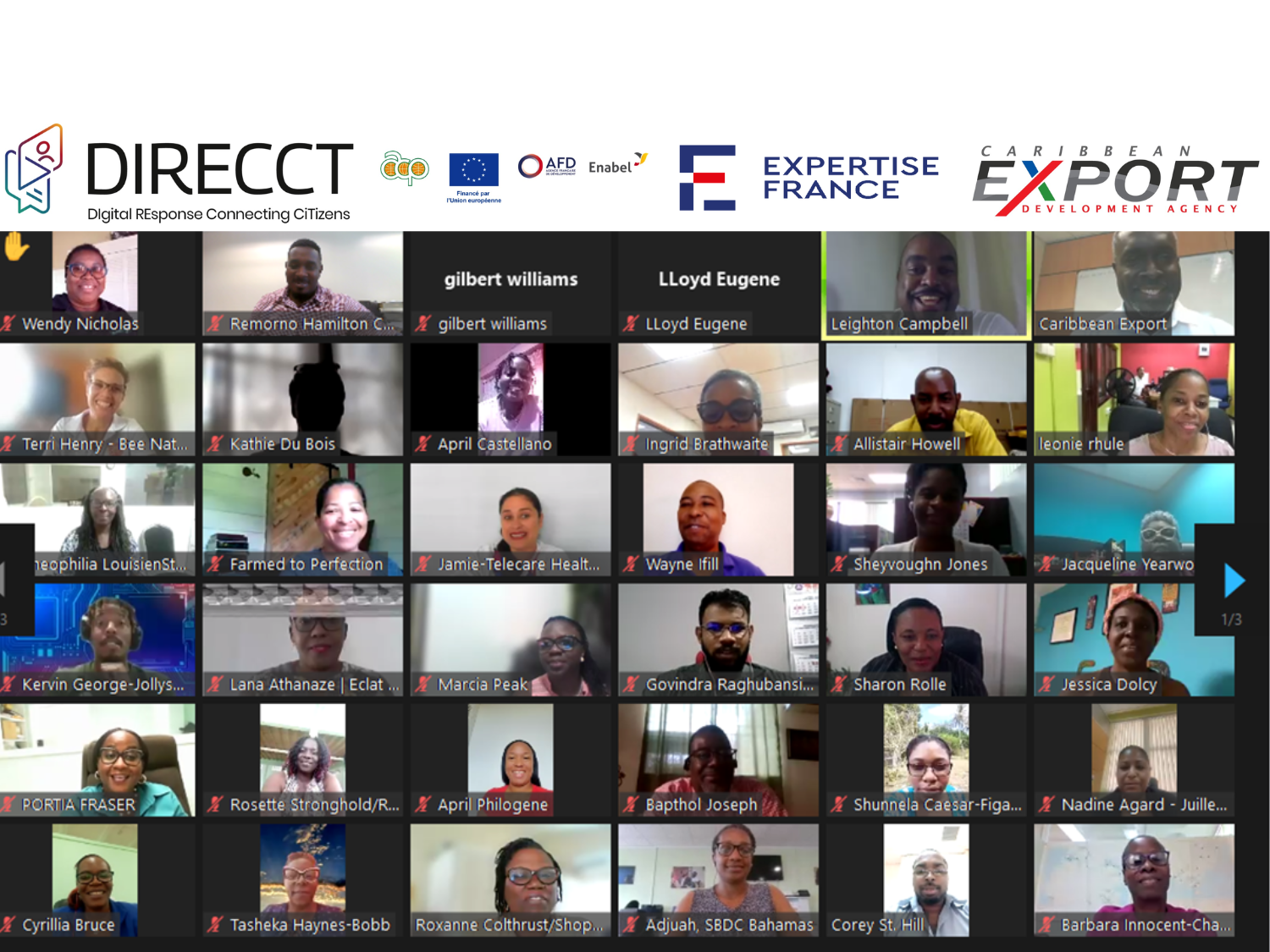 Thirty Business Support Organisations (BSOs) and 150 businesses from across the region will participate in a 5-month joint online training initiative to support E-commerce adoption as part of their business strategies and operations. The technical support provided under the Virtual E-Commerce Accelerator Programme (VEAP) started today, Thursday February 2, 2023.

Two Caribbean digital transformation specialists, Gilbert Williams and Leighton Campbell are facilitating the training and coaching. These master trainers met with representative from BSOs in 13 Member States over a period of five weeks to prepare them with core content and strategy that will allow each of the BSOs to work with at least 5 businesses throughout the rest of the programme. The BSOs will work together with the master trainers to guide the businesses to successfully adopt e-commerce leading to increased sales and expanded market reach.

“The VEAP is part of Caribbean Export’s wider digital transformation of business agenda. Key design elements of the programme include building the capacity of BSOs to deliver e-commerce adoption initiatives to their clients during and beyond the project’s life.  I am confident that we have developed a unique and adequate methodology to achieve this outcome.” – stated Phillip Jackson, Programme Lead and Advisor for Innovation and Digital Business.

The current training will be followed by a second installment of the programme that will incorporate the lessons learnt from the first iteration. The second phase will target a new cohort of businesses.

For more information or to get involved contact Phillip Jackson at : pjackson[at]carib-export.com 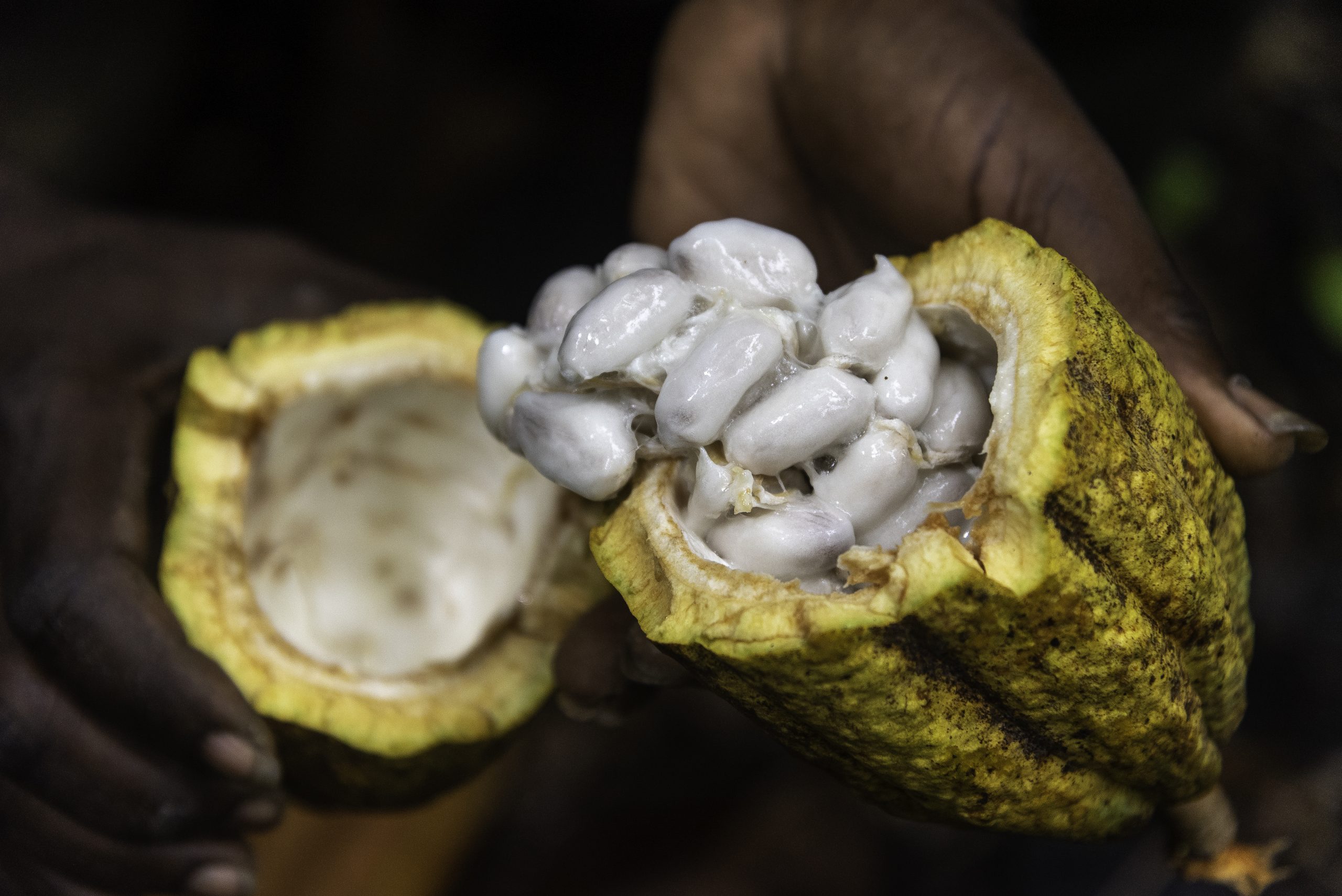 Promoting fair trade and organic cocoa among farmers and transforming the image of Haitian cocoa worldwide. These are the ambitious but realistic objectives of the Fédération des Coopératives Cacaoyères du Nord (FECCANO – Northern Cocoa Cooperatives Federation), which has managed to position itself both on the local and community level and on the international market.

It has been said that the inhabitants of the Northern parts of Haiti are a proud people, particularly owing to their contribution to the founding of their nation. The 4,000 cocoa farmers who are members of FECCANO can also be proud. Founded in 2001 by six cooperatives, the federation has become in its 20 years a leading player in the production of fermented cocoa in Haiti. It now brings together eight cooperatives, has developed a formal structure and is constantly improving its skills, knowledge and the quality of its cocoa. This growth is encouraged by the Caribbean Export Development Agency (Caribbean Export) through its programme to support the cocoa/chocolate value chain in Haiti and the Dominican Republic.

Haitian cocoa has a remarkable intrinsic quality. Whether criollo, trinitario or forestero, its fruity aromas and its characteristics stem from the old varieties cultivated by the farmers, but also from a soil favorable to the production of a high-quality cocoa. The average annual production is currently estimated at 400 tons with an annual growth rate of about 20%. This is very little compared to the national volume estimated at 6,000 tons annually, and 60,000 tons in the Dominican Republic.

Haitian cocoa farmers have long been dependent on intermediaries: traders, hucksters, speculators and exporters, working within a monopoly market, who have always offered very low prices. Since its establishment in 2001, FECCANO works directly with the cocoa farmers. This arrangement has led to the recovery of the added value of the product and increased producers’ income. “Back then, we used to cut down cocoa trees, but today we plant cocoa” boasts Guito Gilot, one of the founding members.

In the ‘Jardin créole’ as the Haitian vegetable garden is known, in the shade of the cocoa trees, farmers not only cultivate yams and plantains, but also cassava, beans, corn, chayote, etc. Fruit trees, especially citrus trees, associated with cocoa trees, feed the family, but also give the soil and the land a quality that will give each cocoa its particular flavor. This Creole garden, at the heart of the Haitian ecosystem, is at the root of the Haitian family survival. Even though it has slowed down the development of cocoa production, considered as secondary, it could however be its future thanks to the promotion of the whole chain and the particular taste associated with each type of soil.

In 20 years, the cocoa exported has changed category. Through training, sharing of good practices, and better knowledge of their product, FECCANO has helped farmers, both male and female (40% of the members are women), who grew a few cocoa trees underneath mango trees, become exporters of beans certified according to organic and fairtrade standards. It is worth noting that it is the fermentation process, an essential step to release the “precursors” of aromas and to obtain a quality product, which has been a turning point, when for decades the cocoa in the area (and in the country) was not fermented and therefore sold at lower prices.

Since 2008, with the technical assistance of a French NGO (AVSF) and the support of the Conseil Départemental des Hauts-de-Seine (France) (Departmental Council of Hauts-de-Seine), FECCANO has undertaken to mastering the fermentation process to enhance the value of its cocoa. It has gradually positioned itself as the pioneer of quality cocoa across the country, before becoming the national leader and building a global image. In 2011, FECCANO obtained the Ecocert certification. Two of the largest international chocolate companies, Ethiquable and Valrhona, have become its biggest buyers. In 2013, FECCANO obtained the SPP (Fair Trade) certification, and in 2013 and 2015, it obtained the Cocoa of Excellence prize awarded by the International Cocoa Awards. It grew to 7 member cooperatives in 2014, and then to 8 in 2018. Simultaneously to this growth, the Federation is working to change mentalities.

“We are committed to respecting the environment and are keen to incorporate practices relative to the conservation of biodiversity and food safety into our processes,” explains Jean Guillaume Célestin, executive director of the Federation. FECCANO plays a key role in raising awareness, providing guidance and personalized assistance to farmers. “It was not easy to convince farmers of the benefits of the cocoa tree “regeneration” program when it was put forward in 2015. We recommended introducing new seedlings on these 60 to 80-year-old plots and carrying out a diagnosis to implement the systematic pruning of the oldest trees. They were afraid that the plot would be less productive. I was afraid of it myself…” says Dejean Phanord, chairman of the board of directors. But it was proven to be the best approach.

Today FECCANO wants to go further… And Caribbean Export supports it through a program financed by the trade and private sector support component of the bi-national HT-RD program under the 11th European Development Fund (EDF) of the European Union.  In June 2021, the Agency organized a virtual training on quality management systems, certification management and cupping. The objective was to strengthen the knowledge of FECCANO staff in Haiti, to orient them towards competitiveness and enable the network’s cocoa to have a better image and to carve out a place for itself in the specialty cocoa market.

Following this training, FECCANO intends to provide technical assistance and work on a strategy to improve the quality of their cocoa and direct it towards a higher value market.  A field visit will allow them to develop a concise, effective and appropriate strategy. These corrective and preventive actions should improve production and post-harvest processes, resulting in better quality and the possibility of reaching higher value markets.

Early this year, Caribbean Export supported the creation of a website that will introduce FECCANO and its member cooperatives to customers and the general public, as well as the different services and products the federation provides. In February 2022, the Agency also organized meetings with other cocoa sector professionals. This project which aimed to exchange best practices was organized with the National Confederation of Dominican Cocoa Farmers, CONACADO (for its acronym in Spanish), with the aim of learning about their promotional strategies and marketing of Dominican cocoa, their production and processing techniques and organizational management mechanisms implemented in the Dominican Republic, the leading exporter of organic cocoa in the world. Following this, FECCANO has included the process of making chocolate from the bean to the bar in its future projects. “This is part of the challenges to be undertaken, along with our efforts to increase production and competitiveness, and therefore convince producers to plant more. But not only that… we need a real cocoa policy in Haiti, with institutional strategies on agriculture, and also on transportation. Most of the production areas are very isolated and fairly inaccessible,” explains JG Célestin.

Changing the image of Haitian cocoa takes time, but the results are very promising. FECCANO has guided its members, accompanied the farmers, and stimulated a solidarity that has helped them achieve the vitality of an organized national producer. Of the 8 member cooperatives, all are certified fair trade (SPP), 4 are already certified organic and the other 4 are in the process of being certified. With a significant increase in exports (50% between 2020 and 2021) and support such as that offered by Caribbean Export which focused on the value chain, the dream of going from the bean to the chocolate bar could become reality. The 8 cooperatives now ensures the fermentation process is undertaken. The federation receives the beans ready for export and can test them in its laboratory. Thanks to the recent virtual capacity training on cupping, FECCANO is now able to evaluate its roasted product. It is only one step away from the bar!