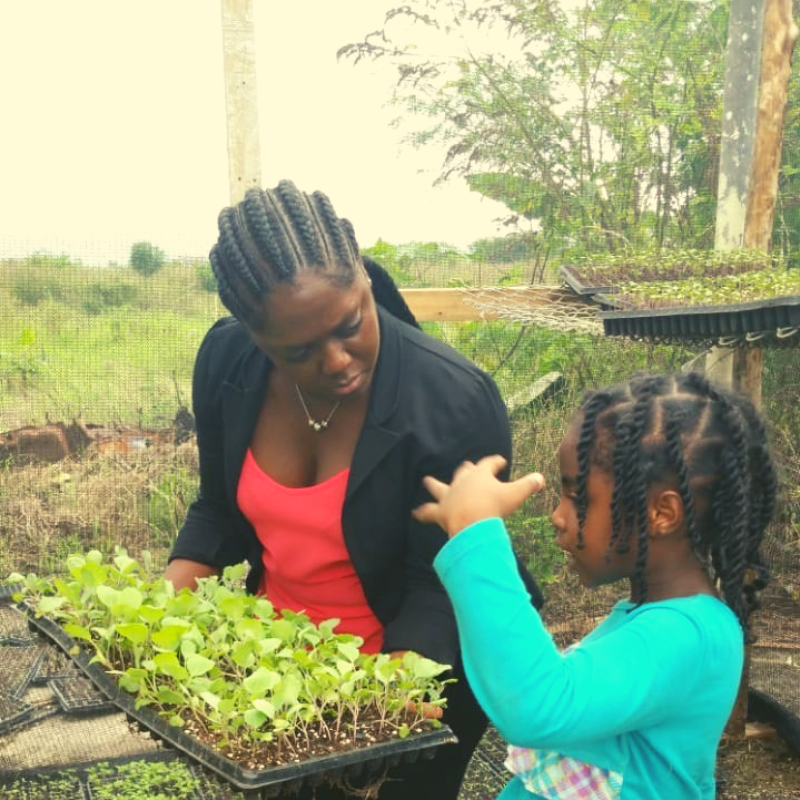 Founded in the land of wood and water, this social enterprise is transforming lives by offering healthy, nutritious foods, sharing knowledge and empowering other members of the community.

CEO Craslyn Benjamin established Benlar Foods in 2014, while working as a strategic forecaster with Jamaican food giant, Grace Kennedy.Â  It was initially an experiment intended to troubleshoot a supply shortage Grace Kennedy was experiencing.Â  Benjamin was contracted to grow scotch bonnet peppers, and with two acres of land, she rolled out a fully organic, best practice set up.Â  The experiment proved to be several times more bountiful than imagined.

â€œIt was amazing,â€ she said.Â  What I made in three months of reaping, I was making in a year of salary at Grace, and they paid me really well.â€

Inspired by her success, Benjamin resigned from Grace to run Benlar Foods fulltime.Â  She strategized on how she could increase yield, and grow produce efficiently, and she shared the knowledge gained with other farmers in her community, eager to ensure they too could reap her level of success.

â€œI wanted to increase the availability of authentic Jamaican products,â€ Benjamin said.Â  â€œSometimes you hear, oh, I am not getting the authentic jerk seasoning anymore from Jamaica.Â  I have an issue with that because our country is known for its food and spices, so I feel the need to protect that,â€ she said.

After a year in business, Benjamin landed a major contract with Burger King.Â  It proved to be the stepping stone toward developing a sustainable business model.Â  She scaled up production, created new products and launched Benlar-branded spices, all with a view toward strengthening brand Jamaica.

Scaling up and going global

With four years of business under their belt, and six major contracts, whatâ€™s next for Benlar Foods?

They have just incorporated an e-commerce platform, which facilitates trade by enabling them to drop shipments in different countries.

Organic prepared foods are next on their list of offerings, and they are setting up an agro processing facility to facilitate this.Â  It will allow them to control freshness along the supply chain, add value, and meet customersâ€™ preference for convenience. Â It will be one of the only facilities in Jamaica offering a service of this kind.

They are also pursuing a Safe Quality Foods (SQF) certification, which will allow them to export to foreign territories like Australia and Sweden.

â€œThis is really big for us, in terms of taking us to the next level where food safety and traceability are concerned,â€ Benjamin said.

Mentorship, training and an international outlook, keys to success

â€œResearch programmes and organisations focused on training and mentorship,â€ Benjamin said.Â  â€œThis is key to continued learning and evolution.â€

The knowledge she gained through her enrolment in the Branson Centre of Entrepreneurship, and her selection for President Barrack Obamaâ€™s Young Leaders of the Americas initiative and Caribbean Exportâ€™s WE-Xport programme have been priceless and she continues to reap the benefits to date.Â  The programmes exposed her to how top US conglomerates manage fresh produce and distribution across several states, assisted her with developing a strategic action plan, and exposed her to a network of over 245 entrepreneurs from Latin America and the Caribbean with whom she exchanges ideas daily.

â€œYou must network with entrepreneurs across the region.Â  Study how countries, like Cuba, Venezuela and Haiti do business differently, and see what elements can be beneficialâ€¦to your operation.Â  â€œWe donâ€™t operate in a vacuum,â€ she said.Â Â  â€œA global approach will be key to your success.â€

Visit the We-Xport booth at Bmex in June 2019 to view the Benlar Foods’ product range.

Find out more about Benlar Foods, how they assist other farmers and empower the youth in their community.