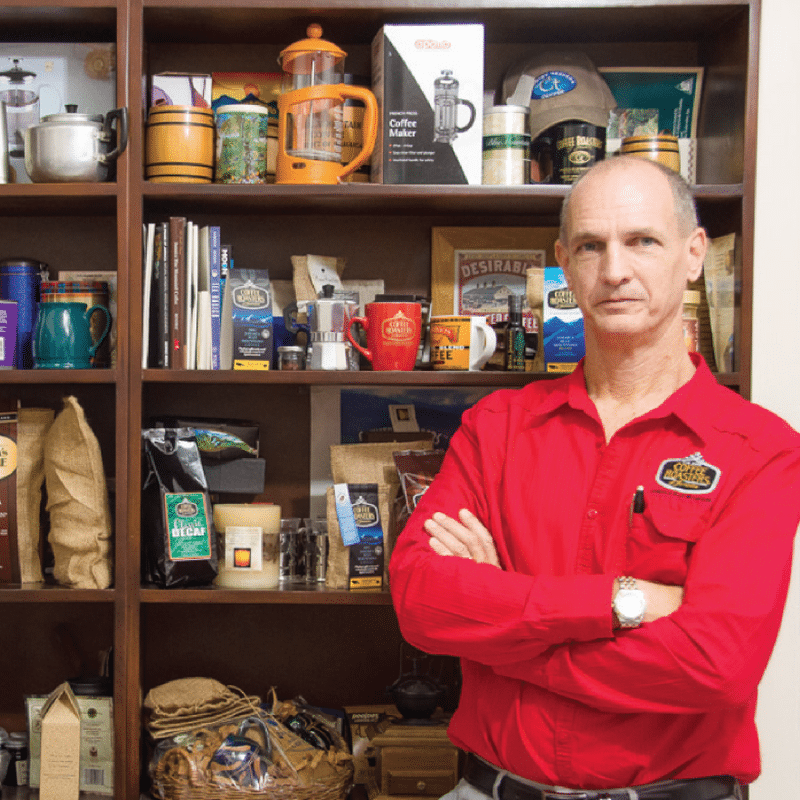 The Caribbean has a long history of coffee production, especially on islands with high mountainous regions and cool climates. Though they are outpaced in modern times by vast coffee plantations in South America, Caribbean countries have unique soils and growing conditions that contribute to some of the most popular coffee varieties sold in the global market. One of those highly sought-after selections is the Jamaica Blue Mountain Coffee.

Known for its superior taste, medium body, and low acidity, the Jamaica Blue Mountain Coffee has grown to become a significant contributor to the local economy, especially small farming communities and coffee distributors, as is the case for Country Traders Limited. Established in 1992, Country Traders set out to be the roasters, packers and distributors of the worldâ€™s finest coffee.

Managing Director, Mark Fletcher, started out as a supplier for other brands, before deciding to distribute his own. Since then, the husband and father of two has amassed more than 30 years experience in the coffee business, and his love for the job and the product he sells is what keeps him going.

Today the company has 15 persons employed across several areas of production. The 100% Jamaica Blue Mountain Coffee accounts for half of Country Tradersâ€™ business value, but they also produce another blue mount blend and an authentic Jamaica blend, which is a combination of low mountain coffee and imported blends for distribution.

On the local end, the companyâ€™s clients include all major supermarkets, gift shops, and some hotels and restaurants. In the export market, Country Traders mainly supplies small distributors and wholesalers, as well as retail through the companyâ€™s website. These include the United States, United Kingdom, Germany, Canada, and China.

â€œChina is our newest and fastest growing market. The middle class Chinese customers are known for their top quality products whether itâ€™s cars, clothing, or coffee, and the Blue Mountain Coffee brand is one of those quality products. There are also quite a bit of Chinese living in Jamaica, and they have been instrumental in introducing the product over there, which has resulted in steady growth.â€

Currently 20% of the companyâ€™s clients exist in the export market. Their export strategy is focused on partnering with small and specialised distributors.

â€œWith high-end coffee, freshness is the key – the fresher, the better. These small distributors are more direct, and the product can get to the customer quicker.â€

Mark admits that the company has come a long way in terms of its growth and profitability. He believes however that much of their success comes from finding their niche early.

â€œWhen we first started, finance was a major challenge. The business had to build from profits because at that time, and even now, interest rates in Jamaica were extremely high. But we realized the value of customer relations, it wasnâ€™t really so much the brand that was driving our success, but more so the strong relationship developed with the customerâ€.

Another formidable relationship that the company has developed is with the Caribbean Export Development Agency. In 2012, Country Traders applied for a Direct Assistance Grant to prepare their facility for Hazard Analysis and Critical Control Points (HACCP) certification.

â€˜We used the grant to make all the necessary structural changes and food safety requirements we needed in order to gain certification and now we are certified.â€

The company also participated in the ANUGA, the worldâ€™s largest food and beverage trade fair, in 2013.

â€œANUGA was an opportunity to showcase our products to thousands of buyers from hundreds of countries all over the world. As a part of the Caribbean Kitchen pavilion, we also established valuable contacts with other regional exhibitors.â€

Mark credits Caribbean Export as having played a central, albeit indirect, role in the companyâ€™s success.

â€œWithout the Agency we wouldnâ€™t have attempted HACCP certification, because the cost associated with the process would have been a challenge for us. We also believe that Caribbean Export contributed to our overall export growth due to the certification we received, leading us to be more streamlined and efficient in our overall production.â€

Read the full article in Primed for Success Vol. 3