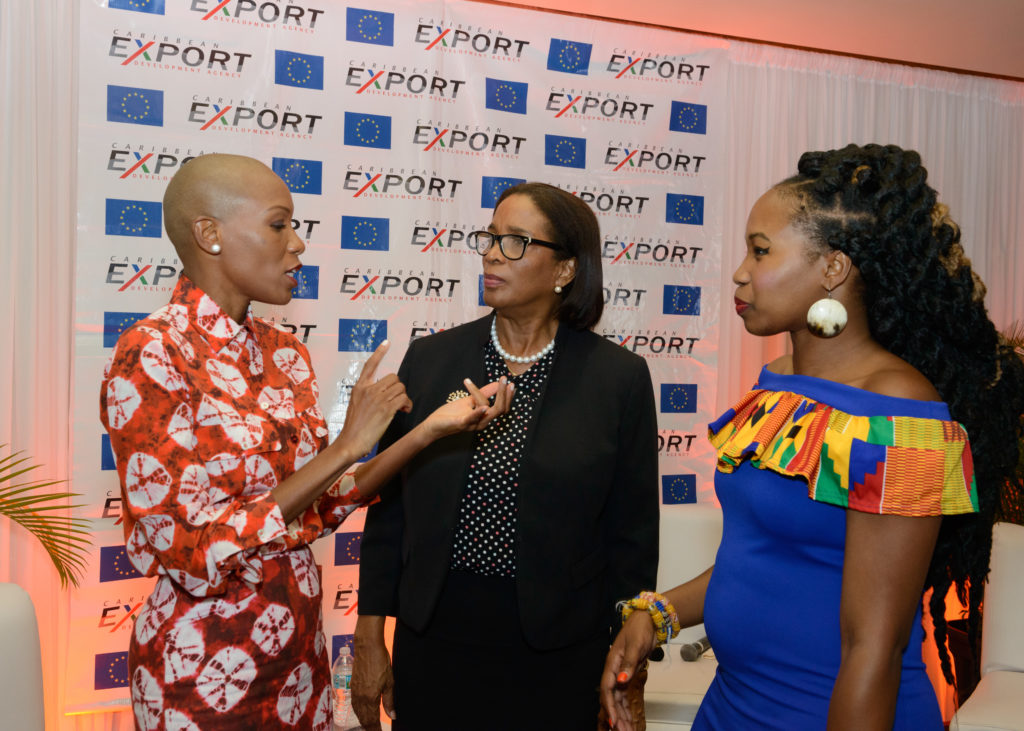 The best business advice often comes from those whose success was built from the ground up!

With this in mind, the Caribbean Development Export Agency (Caribbean Export) as part of their WE-Xport programme arranged for two successful Caribbean women who built their businesses from the ground up, to share their journey with the nineteen female entrepreneurs that are participating in the WE-Xport programme and invited guests during a Fireside Chat held recently at the Hilton Barbados Resort.

These female business owners all completed the WE-Xport programme, a one-year initiative geared at helping them to start exporting their products or to increase their exports and is just one of the programmes implemented by Caribbean Export in cooperation with the European Union.

The guest speakers were Keisha Smith-Jeremie, CEO of Taste Sanaia, an apple sauce brand which started in her kitchen but is now available via Amazon, Whole Foods Market and Walmart, and Christine Souffrant Ntim, award winning Forbes 30 Under 30 serial entrepreneur and the Co-Founder of the Global Start-Up Ecosystem.  They both spoke candidly about their business experience and addressed issues like scaling for growth, capitalizing on digital exports, and the importance of learning the basics.

Keisha, a Bahamian now living in the United States, recalled that when she began her apple sauce business she would wake up at 3 oâ€™ clock in the morning to start preparation. She packaged the finished product, then waited for the UPS truck to collect the dayâ€™s produce before heading to her fulltime job as the global head of Human Resources of a huge corporation.

She did this for a number of months before realizing that it was impossible to grow her business this way.  Keisha was forced to scale up and acquire capital!

â€œI knew that was not sustainable. Having a day job really pushed me into scaling and delegation. It just wasnâ€™t an option to continue in that wayâ€¦. It forced me to think about delegation very early in the process,â€ she said.

The CEO of Taste Sanaia told the entrepreneurs that if their aspirations were to scale, they had to get comfortable relinquishing control of some aspects of their businesses.

â€œYou have to essentially figure out for yourself as an entrepreneur what is your best and highest purpose in your company. Often, we think it is in the creation of the product, but usually those things are commodities. Someone else can create the product, they can create it faster and cheaper,â€ she explained.

She suggested that it was a good idea to work with a co-packing partner, that is, an entity or person, who could produce volumes at scale and had already worked out all the kinks.

Admitting that it was difficult initially to relinquish control, she however pointed out that finding a co-packer enabled her to go to Amazon and Whole Foods Market.  â€œYou canâ€™t do that if you are still the person producing it,â€ advised the entrepreneur whose apple sauce will be in 800 Walmart stores this summer.

â€œCertainly, with food production, whatever the unique aspect of your product is, you want to stay close to that. It is a limiting factor unless you are able to trust that other people can replicate your product and eventually it can be done by machinery, if you really want to grow at scale,â€ she said.

During the course of her expansion, Keisha pitched her business on the reality investment show, Shark Tank. She landed an offer of $150,000 for a 20 per cent stake in her company by investor Mark Cuban.  However, after fleshing out the details of the proposed deal, she opted not to sign off on that deal but to retain Mr. Cuban as a consultant.  She then went on to raise half million dollars on her own to fund the Taste Sanaia enterprise.

â€œI later decided not to accept the moneyâ€¦ in the beginning it is so hard to say no, but what I really had to get clear with myself on was did I really believe the business was going to be as big as I projected it to be?  If it was, I wouldnâ€™t want to give up 20 per cent of the company for $150,000.  You have to believe in yourself and your ability to create something even bigger â€¦,â€ she said of her decision to retain full ownership of her company.

Keisha also cautioned the entrepreneurs that it was impossible for a business to grow without finance.

â€œGrowing up in the Caribbean, there is a mindset to avoid debtâ€¦, but as an entrepreneur you have to get comfortable with the fact that your business canâ€™t accelerate unless you have the capital.  My business was self-funded most of the time but when I started getting yes from Whole Foods, Walmart and other places, I realized that I would be holding my business back if I only allowed it to grow at the rate that my savings would allow and that would not have been the right thing for the business,â€ she affirmed.

And on the note of not holding back, the WE-Xport ladies were also introduced to another goal-getting female entrepreneur during the Fireside Chat. Young, dynamic and disrupting the American and global tech industry is Christine Souffrant-Ntim, Co-Founder of the Global Start-Up Ecosystem and founder of the Haiti Tech Summit.

Hailing from a long line of Haitian female street vendors, she was the first of her family to be born in the United States. She created an online platform called Vendedy to help street vendors sell their products to global consumers via SMS.

Earning 20 per cent commission on each sale, her concept to digitalize street vending accelerated so quickly that she made the Forbes 30 Under 30 List.

According to Christine, â€œAt that time, when it came to Caribbean, African and emerging markets, our problems were not relatable to the US market.  We try so hard to fit the mold of western markets that we sometimes lose focus of what really matters. I realized that if I had to succeed with the business, I had to think creatively with funding and repositioning this product and the value of the people it represents.â€

Since its launch, Vendedy has evolved to become an online directory for street markets worldwide. â€œDonâ€™t be married to your business model, sometimes your business hits the fan when you reach your first customer, so trust what the market friction is telling you,â€ she said of her companyâ€™s evolution.

The technology whiz stressed that the story behind the brand was also critical. â€œThere are thousands of businesses selling the same thing you are selling. The most powerful thing you have as an entrepreneur is not your product, but your stories, your journeys.â€

In addition to the story, she pointed out oneâ€™s ability to learn was also essential, particularly as it related to the technological aspects of the business.  A self-taught coder, Christine realized she could share her knowledge and monetize this â€œserviceâ€ through a website she coded called CaribbeanStartUp.

There she offered to teach persons how to leverage technology and develop their brand. Within 24 hours of the launch, 500 individuals and companies from around the world had signed up!

â€œYou need to be able to export your talents digitally to the world.  We live in a digital age; export is not just physical it is also digital.  Some people forget that you can teach your knowledge, share your background and your story and monetize that.  So for example, if you have the fashion expertise to build bags, you can actually start a tuition series to teach people these skills from a St. Lucian perspective,â€ Christine recommended.

Insisting that the entrepreneurs must leverage technology to advance their businesses, she stressed, â€œItâ€™s not about being a tech company, itâ€™s about being tech enabled.â€  According to the serial entrepreneur, being â€œtech enabledâ€ meant having a website, an accessible email and being visible on all social media platforms.

â€œCulturally speaking, we just give our phone numbers but phone numbers are not accessible twenty-four seven.  With email, you can have two way engagements anytime,â€ she pointed out.

Urging the regional entrepreneurs to learn the basics of all aspects of their business, especially when it came to technology, she said: â€œLearn online, learn on YouTube, learn on Google Academy and the final thing I will say is leverage or learn first from people that understand your problems.â€

Christine recalled that initially she didnâ€™t understand the premise of export but insisted that the small population size of the individual islands meant that Caribbean female entrepreneurs â€œneeded to automatically think from an international mindset.â€

She also recommended they export regionally and supported Minister in the Ministry of Foreign Trade, Sandra Husbands who urged the ladies to explore the Guyanese, Panamanian and Surinamese markets.