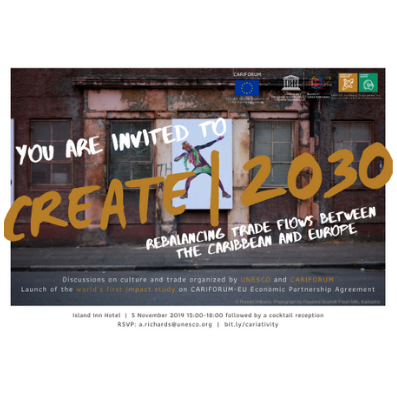 UNESCO and CARIFORUM will organize panel discussions on culture and trade in Bridgetown, Barbados on 5 November 2019. The event marks the launch of â€œCulture in the CARIFORUM-EU Economic Partnership Agreement â€“ Rebalancing trade flows between Europe and the Caribbean?â€, the first impact study on this landmark EPA concluded in 2008, with a dedicated Protocol on Cultural Cooperation.

Cultural and creative industries possess an immense potential to contribute to the regionâ€™s long-term economic growth through employment of young people and cultural content productions. The representation of Caribbean cultural products on the global stage, however, is limited. In 2014, as reported in UNESCOâ€™s Global Report Re|Shaping Cultural Policies (2018),Global South countries accounted for only 26.5% of global cultural exports. The public debates, titled Create|2030, will explore ways to establish a more balanced cultural trade and improved mobility for artists in the Caribbean. Cultural trade experts on the panel will examine the future of creative industries and their role in the Caribbeanâ€™s sustainable development. Artists and cultural professionals are invited to attend and share their insights and perspective.

The event will also present the main findings of the impact study funded by the UNESCO-Aschberg Programme for Artists and Cultural Professionals and guided by the principles of the Convention on the Protection and Promotion of the Diversity of Cultural Expressions (2005). The research has revealed that the Agreementâ€™s cultural protocol, which grants Caribbean creative workers and their creations a preferential and simplified access to the EU market, has not yet resulted in a more balanced relationship between the two regionsâ€™ cultural and creative industries. Despite significant commitments undertaken by the EU, there is currently no dedicated funding or cultural cooperation programme to implement the cultural provisions and benefit the artists. Discussions will therefore focus on unexplored opportunities arising from Article 16 of the UNESCOâ€™s 2005 Convention, the inspiration for the EPAâ€™s cultural protocol, which calls on developed countries to provide â€œpreferential treatment for developing countriesâ€ and their artists through various initiatives such as special visas for artists and cultural workers from developing countries or audio-visual coproduction schemes.

As seating is limited, please RSVP by 3 November to Andrea Richards at a.richards@unesco.org